This entry is being written from memory 6 days later, as well as from some notes I had made while in the hospital. I didn’t actually know the babies’ weights until several hours after their birth, and I didn’t learn their lengths until several days later.

If you recall, I went to the OB for period-like cramping at 30 weeks. The OB did a test called the FFN, which is supposed to predict if a woman will go into labor in the next 2 weeks. Mine was negative and I was told that negatives are more accurate than positives with this test, and I had a less than 1% chance of delivering in the next two weeks.

I suppose my boys and I just aren’t the type to go with the majority, however.

Exactly one week later, on October 19, 2007 and at 31 weeks of pregnancy, my day started like any other. Skip and Calista headed off to work and school for the day, and I started my day working. Normally (during the pregnancy), I would get up, eat, check emails and then take a morning nap before starting my work day. Then I would set up with my laptop in my recliner and work as much as I could through the afternoon.

Friday was a busy day, so instead of my morning nap, I worked until I was about caught up with all of my projects. I also chose to work at the dining room table that day, instead of in my recliner. I had noticed what seemed to be an increase in Braxton Hicks contractions, but because I’d been having so many for so long, and I kept passing the non stress tests (NSTs), I assumed it was more of the same. I finally laid down for a nap at 3:30 pm.

I woke up at 6:30 pm and headed back downstairs to see Skip and Calista who had been home for about an hour. Skip was making dinner and Calista and I hung out for a bit.

Dinner was ready at 7:00 pm and I stood up to go get a fork when I had a sudden, sharp contraction. I stopped until it had passed and then sat back down at the dinner table when I felt a warm gush. It wasn’t a lot, but enough that I knew something might not be right.

I stood and checked the seat, and there was nothing there, so I went to the bathroom. I was shocked and scared when I saw my underpants full of blood. I sat down on the toilet and called to Skip that I was bleeding and we needed to get to the hospital. Because of the placenta previa, I had been warned by my OB that I was to get to the hospital at the sight of any spotting or bleeding, so I knew we needed to get moving.

Calista was at the supper table, and she could see me in the powder room as I hadn’t had a chance to shut the door. She was asking me if there was blood, whose blood was it (mine or the babies’?) and could she see it? I tried to stay calm and asked her to eat her supper, and told her it was ok.

Skip dropped of the phone with me so I could call our friends who were to take Calista and then he went upstairs to try to get our things together. At this point, the blood was coming faster, I was getting light headed and starting to contract more. I called our friends.

Lindsay — who was to take Calista — happened to be in Canada, but her husband was home and said he’d meet us at the hospital and pick her up.

I was trying to tell Skip what I needed as he tried to pack a bag for me and then Calista, but as the contractions worsened and my fear increased, I decided it was time to call 911.

Calista was staying calm and eating as I asked her to, though she kept asking if it was ok and if she could see the blood and I was able to stay calm enough not to scare her too much. I called 911 as I still sat on the toilet bleeding.

Paramedics arrived at 7:15 pm and I had just managed to get a pad and get on to the couch at that point. 2 ambulances and 6 paramedics entered our home as I laid on the couch waiting.

Sometime during this part, Calista went upstairs “to play” and I’m glad she had the sense to get out of the room. I can’t imagine how frightening this must have been for her. Ironically, we’d been talking about 911 recently and she knew I had dialed that number that I had taught her and stressed to her was for serious emergencies only.

A paramedic checked me internally to make sure there was no cord — or worse, baby — coming out, and when it was determined that I was ok, I was lifted from the couch to a gurney and wheeled out of my home.

As they were taking me out, I heard our neighbor, Tammy, come by to ask if we needed help with Calista and I heard Skip say no. And then I was gone.

In the ambulance, I gave more info about my pregnancy, what had happened and tried not to panic. I was starting to contract hard and fast, the bumpy ride was both hurting and scaring me, and I started to panic. They gave me oxygen and we arrived at the hospital within about 20 minutes. I am guessing — based on the time that I saw on the clock when speaking to the 911 operator and then the travel time — that I arrived at St. Joseph’s Hospital at about 8:45 pm.

Nurses filled the room quickly as I was given a second IV (the first was placed when I was in the ambulance), hooked up to fetal and contraction monitors and given a dose of Niphetpine (sp?) to try to stop labor. I was relieved to hear both hearts beating normally, as through all of the commotion, I couldn’t recall when I had last felt them move. Dr. K came in and ordered steroids to be administered to hasten the babies’ lung development.

Skip and Calista arrived sometime in this time frame. I had to try to be calm for Calista, but I was in a lot of pain. Contractions were coming every minute. Calista came to my bedside and handed me a crumpled up card. It was a card she had received for her birthday that she found in her room and told Skip she needed to give to me, but I was already gone when she told him.

My sweet girl handed me that card and stood by my bed and held my hand while we waited for more info and for our friend to arrive to pick her up. She is such a brave girl.

Dr. K explained that the bleeding may be the cause for the contractions, and we could stop labor. Or, I could have started labor and the labor caused the contractions. She needed to do an internal exam to determine what was going on.

Calista was picked up by our friend, and the internal exam was done. Dr. K said I was a few centimeters dilated and she could feel the placenta. The babies had to be delivered. There was no time to stop labor, transport me to Seattle or administer the steroids for the babies’ lung development. I asked how long until the babies might be born and she said 20 minutes. Based on their delivery times, I am guessing that it was about 9:00 pm at that point — just two hours from the time this had started.

The next thing I knew, Skip was calling our mothers, donning his mask and other delivery room gear. I asked if he had the camera (he did) but the memory card was at home. I made him call our friends Bob and Cody to bring us a digital camera and they got us one rather quickly.

Then I was being introduced to an anesthesiologist. I was taken from the room and suddenly found myself on my side with a needle in my back and my body went numb as the spinal took effect.

I felt very little of the actual c-section — not even the “tugging and pulling” everyone describes — but as I knew they were reaching in and taking my boys from my womb, I quietly said my goodbyes to my big baby belly once filled with the thumps and bumps of my boys moving and growing. Their movements and the appearance of my belly were the only things I can truthfully say that I enjoyed every moment of during my pregnancy, and I knew that those days were now over. I tried to make silent peace with the sudden change that was happening and the fear that I felt.

The next thing I heard was Skip exclaim, “There’s a foot!” and then “There he is!” Ace Robert was brought into this world foot first at 9:33 pm, weighing 3 pounds 11 ounces, 16 3/8″ long and was rushed to a table to be worked on. He did not breathe for 30 seconds. 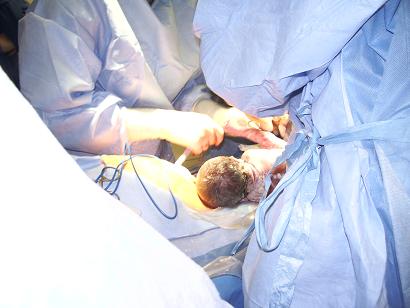 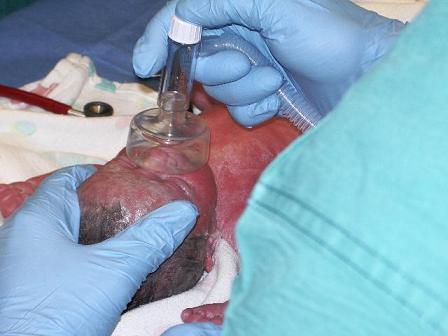 At 9:34 pm, Nate Karsen came into the world with a little cry weighing 4 pounds 7 ounces and 15″ long. He was rushed to a table to be worked on and I was stitched up. 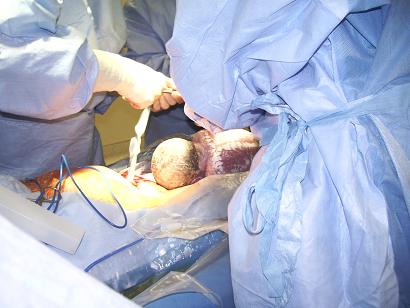 For the next several hours, the boys were worked on by the St. Joseph Hospital teams while they waited for the University of Washington NICU nurses to arrive. Two teams arrived via helicopter and got the boys stable enough for transport. They were brought to me briefly at about 1:30 am before being life-flighted to Seattle. I saw them each for about 10 seconds and then they were gone.

Skip stayed with me a while and showed me the pictures he was able to take. He left at about 2:30 am at my insistence that he sleep at home so he was rested for the trip to Seattle in the morning. Dr. K said I could be discharged the next day — not because I would be recovered, but because she knew I needed to be with my babies.

As the shock wore off, I fell asleep… a confused and scared mother of three.

13 Replies to “Welcome to the World: The Birth of Ace and Nate”