My blog is going to be all out of order for a while as I post new updates and then post previous days’ updates when I have time. Today the boys are 5 days old, so that’s where I’ll start this evening.

We arrived in Seattle at about 3:15 pm today. I am still extremely sore and the 2+ hour ride left me cramped and swollen. Skip got a wheelchair for me and we got everything together to head into the NICU so I could finally meet my tiny sons.

We got up to the NICU unit and Skip showed me how to sign in and then how to scrub in. I was (and am) so impressed how quickly he’s figured it all out, because even just washing my hands properly was overwhleming to me!

After my first glance at him, Skip decided he needed to back me into the room, and that 10 seconds of moving backwards into the room and not being able to see him felt like forever. Skip videotaped as I just cried and looked at him.

I pulled myself out of the wheelchair and Skip showed me how to “gel in” (another sanitizing procedure) and then he opened the isolette. I was able to reach in and caress him. His head and hair was so soft, and his hands so tiny. I just touched him, talked to him and stroked him. I didn’t want to leave for a second, but I also needed to see Ace.

We went over to Ace’s isolette (he’s a few cubicles down from Nate right now) and he is even smaller than his brother. He is also a spitting image of Calista when she was born. It was like looking at her as a newborn, in miniature.

Ace’s nurse asked if I wanted to hold him, and I did. I got in a chair and took off my shirt so we could do “Kangaroo Care”, where you hold the baby skin-to-skin. He fussed and wiggled a bit, and he is so light and tiny I was afraid I’d somehow break him.

He squeaked a little and made some smacking noises and pawed at my chest. Then he found a comfprtable spot and snuggled in for a snooze. From time to time, he would open his eyes and look up at me, and then go back to sleep. I held him this way for a half an hour. 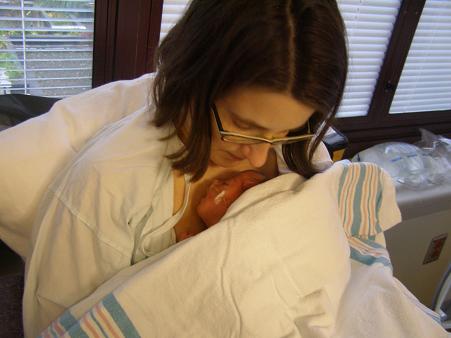 Ace and I during our first moments together

Ace went back into his isolette and we went back to see Nate. Until today, Nate has not been held at all, other than when the nurses move him. I got to be the first to hold him. We did Kangaroo Care like I did with Ace and again, he fussed a bit, found his place and snuggled in. 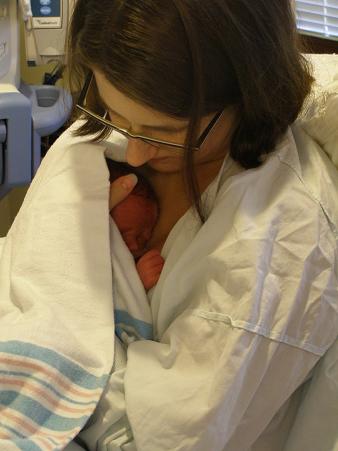 Nate and I together for the first time; Nate’s first time being held

Both of them are so tiny and soft, I just caressed them and kissed them and tried to memorize every move, every sound and every touch between us. When I held them, there was no pain for me, it was like nothing else in the world existed for a moment.

After I held Nate for about half an hour, Skip held him for the first time and I pumped some milk for them. They are up to 13 cc per feeding and to give an idea of their progress, they were taking just 8 cc (Ace) and 10 cc (Nate) yesterday. They need to reach 33 cc per feeding before they can come back to Bellingham.

Also, Nate is off of his CPAP. He now just has the nasal prongs to deliver him oxygen, and it’s not even on all of the time. He’s done with his bili lights as well. So he has just the nasal prongs, feeding tube, and IV. Ace only has a feeding tube and IV.

It is amazing to me how well they are doing. I will go back and write about their delivery and the complications that I had following at a later time, but I will glady take all of the pain and suffering necessary if it means that they will have a smooth ride through the NICU. They don’t deserve any more than they’ve already been through, and if I can go through it for them, I certainly will.

Now I understand why Skip has been having such a great time while he’s been in Seattle, as I can’t wait to go back tomorrow and see and hold them again.

Speaking of which, how could I forget? I got to change Ace’s diaper today. What a challenge! Skip videotaped (and laughed) as I learned how to do it. He seems so fragile, but he sure did fight me on getting his legs straight and letting me put the diaper on him! It took me forever to get it done and Skip thought that was pretty funny (he’s changed several diapers already). I thought I did well for a first go at it, though. :)

We are now resting and just waiting to go back in the morning. We have been so fortunate as to have a place to stay during this time. Our dear friend Lindsay has a friend who owns a condo in Seattle. They normally rent it out but it happens to be vacant until November 9th, so Lindsay’s friends gave us the key and said we can stay until their renters come.

These are people who have never met us, people who would not know us if they ran into us on the street. Yet they so generouly gave us the key to their condo and not only did they do that, but it is an absolutely GORGEOUS place. Beautiful hardwood floors, furniture, tilework, and it is on the 17th floor in downtown Seattle so as I type, I can see the space needle. And I’m not talking, “There it is, waaaaaaaaay over there”, I’m talking I can SEE it — I can see the elevator as it goes up and down and can see people up at the top. It’s amazing.

Calista is with Lindsay and her family and will hopeuflly join us on Friday night or Saturday morning. It is hard to be missing her when the boys need us, but she’s doing a remarkable job of dealing with all of the turmoil and change and I can’t wait until we are all together as a family.

That’s it for tonight. I am going to try to post some pictures later, and keep an eye out at http://www.cronck.com as Skip has been doing a great job of sharing photos and his thoughts on this amazing journey.

46 Replies to “Day 5: Meeting My Boys for the First Time”