First, let me say that I posted the boys’ birth story earlier today and moved it so it’s in the right place (chronologically) in this blog as I try to catch up and making me entries for days when I was without Internet access.

I had a good sleep last night, and after I woke, I realized that it was the first night since the boys were born that I have not had a nightmare. I had been attributing my strange nightmares to the late night pain medications, taken on an empty stomach but hadn’t given enough credit to my subconscious, I suppose. Last night’s dream was plenty strange all right, but it wasn’t scary.

I had been pumping milk every 3 hours around the clock until last night as well. One of my books said that I didn’t have to do every three hours through the night, so I took the opportunity to sleep a little more in one stretch than I had been doing. Pumping is going well so far — after the setback of the second surgery, I was afraid that all of our breastfeeding efforts might have been ruined, but thankfully, they have not.

After we got up, we spent some time getting prepared for the day — I pumped, ate, got showered and took care of some calls and tasks I wanted to get done. One of those was to get Miss Lulu a new booster seat. You see, we had gotten her a high-back booster seat so that we could easily move her from vehicle to vehicle as she needed to spend more time with friends towards the end of the pregnancy and especially now. When she first used it, she loved it, as it’s different than a car seat or 5-point harness seat like the one she was in. She asked if she could always use it, but I told her that her other seat was safest, and this seat was just for use in Lindsay or other friend’s cars. I also told her, however, that once the boys arrived, she could always ride in her “big girl” seat in the car.

Now that the boys have arrived, I wanted to do something special for my sweet girl who has been so strong and spent many days away from home as we go through this transitional time. She had really wanted a Disney Princess booster seat. Unfortunately, those are only available in a backless booster style, which Calista is still too small for. I did, however, find this one, that is quite pink, quite princessy and is just the right type of seat for her. When my big girl arrives in Seattle again, she will receive this big sister gift from her Mommy, Daddy and Brothers: 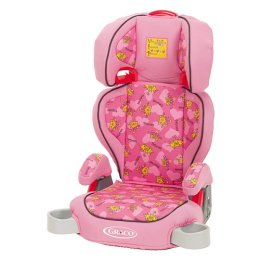 It says “Very Important Princess” on the tag on the back — what princess could resist? Our friend Tracy had gotten it for us and we will get it from her soon so we can have it ready for Calista’s arrival in Seattle.

Gosh, I swore I wouldn’t get all long-winded and bore people…

Fast forward and we’ve arrived back at the NICU. I am feeling more confident about knowing what to do when we arrive, how to sign and scrub in and where the boys are. We can go and see them, touch them, and when we feel comfortable doing so, take them out and hold them on our own without help or asking. It feels so strange to me to arrive and go to a plastic box and open the doors to reach in for my baby, like it’s some kind of strange store and the babies are each in a display case.

I visited with both boys briefly to start (they are in different rooms still, so I am trying to go back and forth between them both). I said hello to Ace for a few moments and they said he was going to feed soon, so I went to say hello to Nate and then planned to return to Ace to allow him to snuggle at my breast as he was fed, to start to teach him that the breast is associated with a full tummy.

I got to Nate and was so pleased to see he had no more nasal cannula or any other breathing equipment. He is breathing room air! The nurse also told me that he would be having his umbilical IV out soon and then I could hold him. I stroked him and talked to him a bit and then returned to Ace for his feeding. 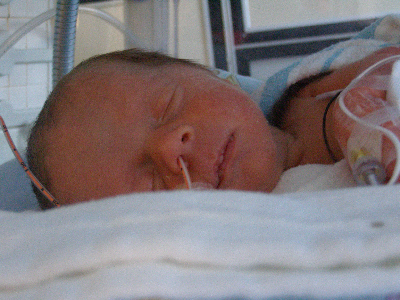 Nate, free of his breathing equipment and resting peacefully

I returned to Ace and they nurse took him out of his isolette so I could hold him. I held him to my breast as his nasogastric tube sent food directly to his tummy. It was an incredible thing — his little mouth started going and he was smacking his lips and licking at my nipple. I gave him drops of milk from time to time as he snuggled and he eventually drifted off to sleep in my arms.

After that, I pumped again and then returned to Nate. He was just have his umbilical IV removed and once it was, he was placed on my chest. The nurse had to adjust the IV in his hand, and he cried when she did. It was so sad to hear his little cry, but I also was glad I was holding him and could soothe him as she fixed it.

I put Nate to my breast as I had done with Ace, even though Nate was not being fed at the moment. The little guy took right to my nipple as if it were a pacifier and went to sleep. I also noticed that when I held him, the lines on his monitors get so consistent — not more erratic like when he’s in the isolette. The “erratic” lines on the screen are not a bad thing, they are totally normal, but there is a definite difference in his monitor when he is with me. We were in a recliner and I fell asleep as well. He slept on my chest for over an hour.

Daddy also got lots of time with both boys today. When I see them with Skip, I am reminded just how tiny they are. I know that a lot of the pictures don’t convey their size well at all. I thought I had known how small they were, but when I saw them for the first time, I realized I could have never dreamed of a baby so tiny and perfect. 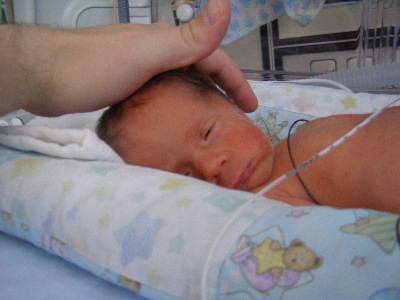 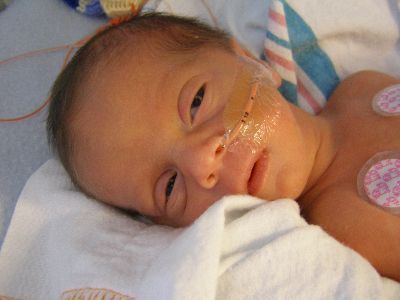 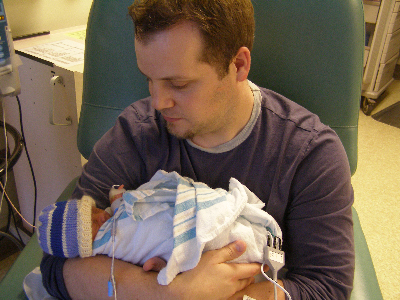 Some general developmental info… Nate and Ace now only have nasogratric tubes and IVs in one hand each (and, of course, the cords and wires for the various monitors). Their nasograstric tubes are how they are fed, and the IV provides additional fat and nutrients while their tummies are not quite large enough to take in all that they need. Nate currently takes 20 cc per feed, and Ace is at 18 cc. Nate’s goal is 40 cc per feed and then his IV can be removed; Ace’s is 33 cc per feed to have his IV removed. They are both at least halfway there! Once the IVs are out, the next goal is to get them to take their feedings by breast/bottle.

I look forward to tomorrow and watching them grow and get stronger with each passing day.

17 Replies to “Day 6: Lots of Holding and Time at the Breast”