I think that the world had it in for me today.

First, it snowed yesterday. Not a big deal, except in this town, 2″ of snow means cancellations and delays. That meant Calista didn’t have to be at school until 12:15 pm. Skip said he had too much to do at work to go in late, so it was up to me to either keep Calista home or get her to school.

It’s Thursday, and the mom of one of Calista’s friends at school once said that Calista was welcome to go to her house on a Thursday after school if we wanted. I thought it would work out great — K could feed the kids lunch then run into town with them to take Calista to school, then Calista go go to P’s house after school and Skip could get her on his way home. Excellent.

When Skip went to get Nate from his crib this morning, there was a large pile of puke in it. We had no idea he had puked. We don’t even know when he puked. He never complained about it.

Cleaned up his bed, got them all downstairs and popped the boys on the couch to watch Sesame Street while we got them milk. They were drinking their milk while I was on the computer in the kitchen and Skip was making his breakfast. I return to the living room to see that Nate has puked up his milk all over himself and the couch. Again, he never made a peep — just barfed and went about his business. Greeeeeeeeeeeeeat.

Tear the cover off of the couch, clean up Nate and Skip heads off to work. I feed Ace some banana and oatmeal, and later, give Nate a few bits of banana.

The boys head off to nap and I have Calista get dressed and ready and I do the same. Then K calls. She was at the doctor and it ran late, and she’s going to have to go for a blood draw. I told her I had hoped she’d take the kids to town to take Calista to school because of the delay, so she says she’ll skip the blood draw, get the kids, go back to town and then do the blood draw. Perfect.

11:15 am the phone rings and K is hysterically crying on the phone. The mailman was on the side of the road, decided to pull out in front of her, she tried to give him room and ended up spinning out, going backwards into a ditch and slamming into a fence. She’s stuck on the side of the road in the snow. The mailman who caused her to wreck LEFT THE SCENE and she’s alone. Says she’ll walk to my house.

I tell her, no, call 9-1-1 to file a report and I will pack up the kids and come get her. I get Nate first as he’s just waking up, get him outside, am JUST about to put him in the car when he throws up his banana and milk all over me. Twice.

I go back inside, change Nate, take my jacket off, get him back outside and in the car. Calista gets in the car and I go for Ace. We all load up and go off to find K.

She’s not far from my house, the police and the tow truck have not arrived yet. We wait a while and finally the police come. He doesn’t write a report since he doesn’t think that the damage exceeded $700. 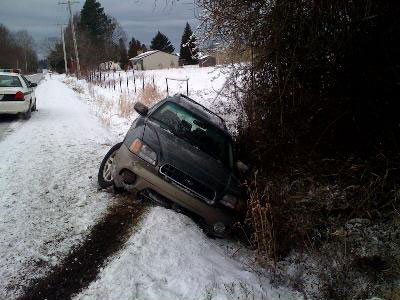 We all head back to my house to wait for the call from the tow truck driver. I give K some dry socks and a sweatshirt as she’s freezing from being out in the snow.

At this point, we discover that Ace has diarrhea and a raging diaper rash. I take him to soak in the tub, while K deals with Nate. At this point, it’s too late to get Calista to school, so she goes off and plays in the play room.

Ace is in the tub and the tow truck company calls. I tell K to take Ace and I will go get her car. Her car gets pulled out of the ditch but then the tow truck driver says it will be a big deal to get it on the truck, and since it’s driveable, I can just drive it back. But there’s one of me, and now two cars to drive (K’s and mine). We drive back to my house with K’s car, then the tow truck driver takes me back to get my own car and I bring it home.

Now it’s 1:30 pm, I have not done more than 10 minutes of work, and I have an appointment with my accountant at 2 pm. I sit at the computer to get my QuickBooks file backed up to take with me, and K starts yelling. Nate has barfed all over her.

I find more clothes for poor K, who’s had such a bad day and now my kids are puking on her, I get clothes for Nate, then head BACK to my computer. It’s frozen. Now it’s 2 pm, my appointment was at 2 pm, my computer is hosed, and I have no QuickBooks file.

I finally get it together and get to the accountant at 2:30 pm, find out I forgot about 1/3 of what I needed for the appointment, and head home. K has to leave as she hit her head on the window during her accident and has to go to the doctor, so she heads out. The boys are napping again, Calista is playing nicely and I got about an hour of work done.

Thankfully, Skip came home 1/2 hour early so I could make a client call and try to get things wrapped up. Nate puked 2 or 3 more times before bed – the poor boy can’t keep a thing down. Ace’s butt is on fire from the diarrhea. Calista has been such a trooper, which reminds me, her fish died last night — that’s a whole other post in and of itself.

Anyhow, the kids are asleep, the house is back in order, piles of barfed on laundry are being washed, K has my car since her has a couple of flat tires and life goes on.

Tomorrow is another day…. Right?