Ace can’t have dairy, as it upsets his tummy and gives him a bad diaper rash.  Therefore, he drinks rice milk.  And since he and Nate share everything, Nate drinks rice milk, too.  Between the two of them, they drink about $16 worth of rice milk a week.  I started wondering how hard it could possibly be to make rice milk, and set out on a quest to figure it out and hopefully cut the grocery budget back a bit in the process.

Well, I did it!  I tried several online recipes, then started combining and tweaking them to make my own.  I had posted one on FaceBook last week, and that one works well, but I found after a day or two of refrigeration, it was getting gritty.  So I have a new one to share, and this one doesn’t have the gritty problem that the first one did, though it does tend to clog their sippy cups (Take N Toss) a bit, but I’ll just get some different sippy cups to remedy that.  :) 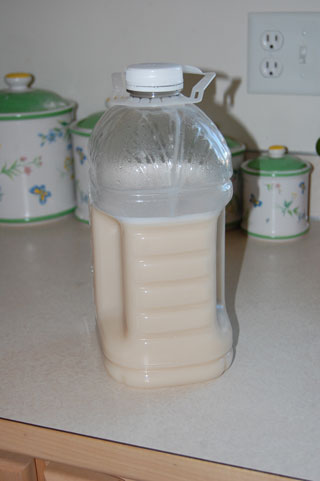 They were drinking plain Rice Dream, so that is what I set out to make.  Skip and I both have tried it against the Rice Dream, and it’s an almost perfect match.  The boys turned their noses up at my first few attempts, but they will drink this recipe, so it’s officially been Ace and Nate approved!  I taste each batch I make, and I must admit, I’m kind of starting to like it myself…

So here is my recipe, complete with pictures (you can click the images for a larger view):

Here’s the batch of rice milk I made tonight.  I haven’t done the math on the actual cost of doing it this way, but I can tell you it’s a heck of a lot cheaper than buying Rice Dream by the case at Costco. 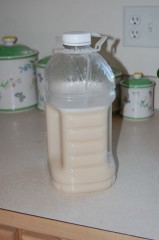 The only caveat here is that unlike Rice Dream, this is not fortified.  There are no added vitamins, Calcium or the like.  I’m looking for a way I might be able to properly fortify it myself, but in the meantime, I am just making sure that the boys get a multi-vitamin and other sources of Calcium.

13 Replies to “Home Made Rice Milk”