Here’s a quick one I learned by reading on-line tutorials: the hooded towel.  This one is so easy that all you need to make two hooded towels are two regular bath towels and one hand towel.  I can literally make these in 5 minutes — I made two right before taking the kids up for a bath tonight! 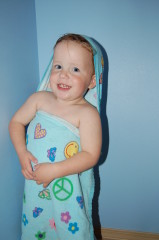 You can go out and buy whatever towels you like for this project, but I’ve made all of mine with towels and hand towels we have around the house.  It’s a good way to practice… if you like your work, then maybe you’d want to head out and buy some really nice towels that you could also finish with an applique or to give as a gift.  :)

To get started, cut your hand towel in half, across the shorter width.  Once you’ve done that, you’re already halfway done making two hoods.

For each hooded towel, you lay your towel out and find the center on the long side.  You pin the finished edge of one of your half hand towels (NOT the edge where you cut) to the center of the long end of the towel, overlapping the towel by about 1/2″.

Once you’ve pinned the hand towel to the bath towel, you just sew them together across the bottom of the hand towel.  I like to use a zigzag stitch.

Now all that is left to do is sew the hood closed.  To do this, you will fold the hand towel (now known as the hood) in half with the right sides together, matching the raw edges where you cut it, like this (my raw edges are on the left in the photo):

You just sew that raw edge together and the towel is done!  Here is my hood serged:

Turn the hood inside-out and it’s ready to use!  Here is the one I made tonight for this tutorial, and the pink ones I made over the weekend: 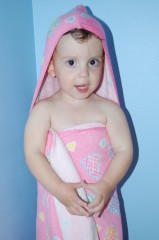 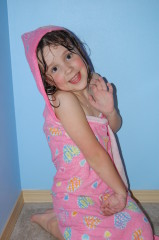 You can also add trim to the hood (the one below was trimmed with bias tape, and I have another I trimmed with ric-rac), or you can add an appliqué to the towel or whatever else you can think of to personalize it.  The possibilities are endless!