Welcome to what started as my in-vitro fertilization (IVF) blog. Now, almost 6 years after I started it, it’s just become my ordinary old blog. :)

My husband, and I were married in 2001, and now have a beautiful little girl, Calista, who was born in 2003, and her little brothers, Ace and Nate, who were born in 2007. We’re expecting one more in March 2013 – a very welcome surprise. This is our story…

About a year after we were married, we decided to start a family. After several months of trying to get pregnant, I went to my OB/GYN for some tests, to see if there was a reason it was taking so long. I had a Hysterosalpingogram (HSG) during a laparoscopy. Everything looked good.

The next step was a semen analysis. After doing the test, we had to wait for results. While we were waiting, we traveled to my husband’s hometown to spend Christmas with his family. While we were there, and just a few days before Christmas, we got the call that the results were not good. in fact, they were pretty bad. We decided to take the month off of trying and enjoy the holiday. We’d worry about how to move forward when we got home.

A second semen analysis was scheduled for mid-January. However, much to our surprise, we got a positive pregnancy test on January 10th, 2003. We were ecstatic, and after a great pregnancy, delivered a beautiful, healthy, 6 pound 15 ounce baby girl.

Life was great. I started a home based business to be able to stay home with our daughter. I ran that business for 6 years.

When Calista was 5 months old, I decided that I wanted a place to talk to other moms, but I couldn’t find a community on-line that I really felt at home. Connected Moms was born and it still going strong.

When my first postpartum period returned, we started trying for our second child. We knew that it might take a while, based on the test results we had back in December 2002.

After 6 months of trying, we decided to do another semen analysis. On January 8th, 2005, almost two years to the day of our positive home pregnancy test that announced our daughter’s impending arrival, we sat in the office of the reproductive endoncrinologist (RE) awaiting our results. We were told that we would most likely need IVF to conceive again. The doctor said that we could try intrauterine insemination (IUI) since we have proved that we can get pregnant, but that IVF was our best bet.

Unconvinced that IVF was what we needed, I consulted with my OB/GYN. He suggested that I talk to a different specialist in town, and so we did. She felt that IUI would be a good option for us, since we had gotten pregnant on our own before. Before trying IUI, she suggested that we try having Skip take supplements to see if it would be enough to boost his sperm and get us pregnant naturally.

After three months of supplements and no pregnancy, we decided to go ahead with the IUI. We also decided at that time that we would give IUI 6 tries before calling it quits.

Our first IUI didn’t actually happen until January 2006 because of scheduling conflicts. We did not get pregnant.

We skipped treatment in February and March 2006 because we had sold our house and were moving to our new home. After we were settled in to our home, we resumed treatments.

In April 2006, I tried 50 MG Clomiphene Citrate (Clomid) in the hopes of having more than one egg release, thus increasing our chances of success. Unfortunately, I did not ovulate that month.

In May 2006, we tried 100 MG Clomid, and had 3-4 follicles the day before the IUI. However, we did not get pregnant. Our specialist suggested that we talk to an RE in Seattle about IVF. We filled out the paperwork for a referral, and decided to keep trying the IUIs in the meantime.

In July 2006, we did 100 MG Clomid again, but I opted not to have an ultrasound to see how many follicles we had. The previous month, I had been so hopeful, certain that we’d get pregnant with 3-4 eggs! We went for our IUI on July 11th. Before the procedure, I asked our specialist why she was referring us to the RE before our agreed upon 6 IUIs. She said that the sperm was not looking good, and that our chances of success with IUI were slim. We proceeded with the IUI anyhow, but held little hope of it working for us. Our fourth and final IUI also failed.

We came home, armed with a folder full of information about IVF. Our referral to the Seattle clinic didn’t pan out, so we changed clinics and got our first IVF protocol in August 2006. The grand total was to be around $13,797. The price tag included medications, ultrasounds, egg retrieval, embryo transfer and other fees.

We didn’t have that kind of money laying around and that’s where this blog came in. We were saving and scrimping as best we could, and we sold a lot of things on eBay, Craigslist and the like. We had some affiliate programs and other ways to earn income, so I put this site together as a one-stop shop for all of our IVF fundraising efforts.

We managed to raise $8,354.56 in just a few short months, and financed the remaining amount on a home equity line of credit. Our egg retrieval was October 20th, 2006, and we transferred three grade 1 (best score on a scale of 1-5) embryos on October 25th. Sadly, we had a negative Beta (blood pregnancy test) on November 3rd and no frozen embryos left over.

Even though we swore one IVF was all we would do, both for financial and emotional reasons, we soon started talking about trying it again. We raised another $5,176.12 and put the rest on a shiny new American Express. We had an egg retrieval on March 30th, 2007 and a 5 day transfer of two “gorgeous” blastocysts on April 4th. One of the two was even hatching which is a very good thing. On April 9th, 2 years 10 months and 8 days after we started trying to get pregnant, I finally got not one, but several positive home pregnancy tests! We were finally pregnant again and welcomed our twin boys into the world – 9 weeks early – in 2007.  Baby A weighed 3 lbs 11 oz and Baby B weighed 4 lbs 7 oz.  They spent 30 days in the NICU.

We knew we could not emotionally or financially afford any more fertility treatments, and considered our family complete. Until one day, in July 2012, when we found out someone had other plans for us…

After my third pregnancy and my third round of hyperemesis gravidarum (HG), our fourth child, and second daughter, joined us on March 6, 2013.  She weighed 7 lbs 13 oz.

After 10 years, 4 IUIs, two rounds of IVF and I dare not try and count the number of pregnancy tests… we are finally a family complete. 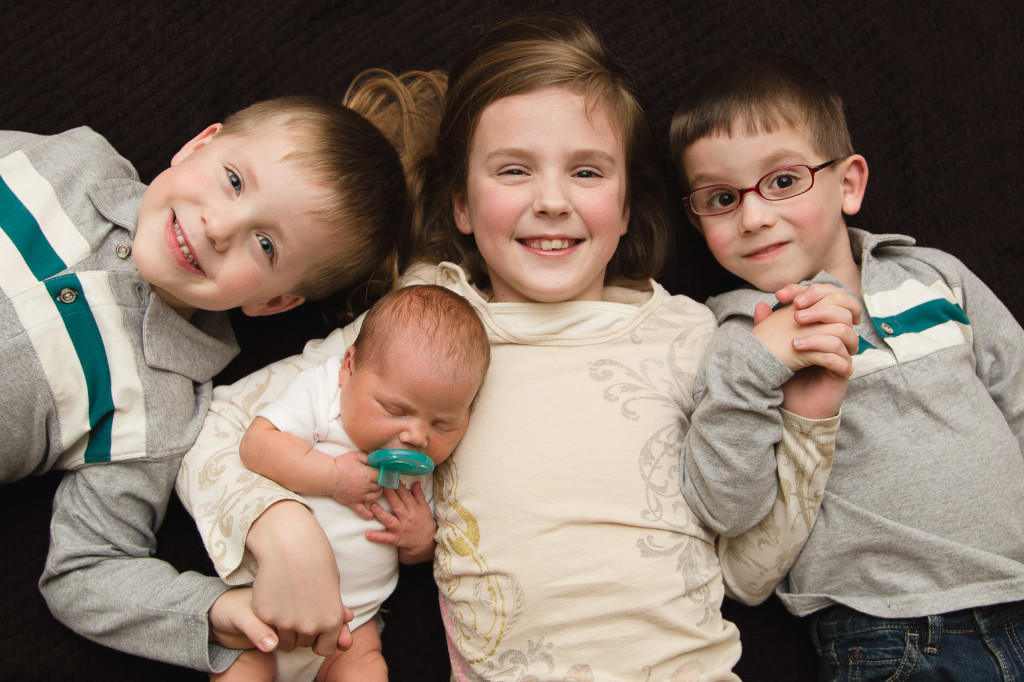 7 Replies to “Our Story”