One of my boys recently discovered a scrap of Buzz Lightyear fabric I had left over from a previous project.  He asked me to make him something, so I scoured the Internet and found this tutorial for a toddler backpack that looked easy enough: http://indietutes.blogspot.com/2009/10/toddler-backpack-pattern.html 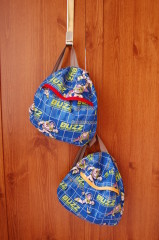 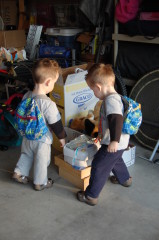 She notes that there may be some puckering when sewing the side to the top and back because the interfacing doesn’t allow for stretch, but I didn’t use interfacing and it still didn’t fit properly, so I think her measurements may be slightly off for the side.   She said to cut the side pieces 3″ x 34″, but I would try 34.5″ next time to keep it from puckering.

Another change I made was that I sewed a bias tape trim along the top flap (to differentiate between backpacks).  I top-stitched around the side in a thread to match the trim, just for effect.

I originally did not put any type of closure on the bag, but once it was full of stuff and hanging open, I thought it needed something, so I added a velcro tab on each one to keep it closed.

A change I would make next time it to add a loop at the top between the straps to make it hang easier, but that’s minor.

Overall, these were pretty fast to make, and required very little fabric.  They fit the boys perfectly!